Located in the archipelago of Azores, Horta is a beautiful city in Portugal. Horta’s marina is the main stop for yachts crossing over the Atlantic Ocean. The marina’s walls and walkways are covered with paintings made by visitors that note the names of their vessels, crews, and the years in which they have visited the marina. 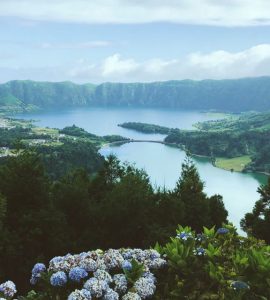 Horta is the main transatlantic staging post in Portugal, and this natural harbour is one of the busiest marinas in the world. The big and colourful mosaic painted beside the harbour is one of the unique scenes of Portugal. If you rent a car, you will be able to make trips to the nearby massive stratovolcano and the entire peninsula that was born after the eruption of the volcano in the 1950s. There are many car rental companies in Horta, and there are many cheap car hire plans available. You can compare car hire plans online to choose from a variety of hire cars. Doing a car rental comparison is a must if you want to find the best hire cars to explore Horta.

Once you have your car hire in place, it is time to explore the many things to do in Horta.

Some sources estimate that Horta is the fourth most-visited marina in the world. It is also a port of call or the final destination for many races like ARC Europe and Les Sables-Les Acores-Les Sables. The jetties and seawall that are plastered with colourful messages from the crew of the many yachts and smaller vessels that have visited the marina over the years. It is a stunning sight to behold.

Located inside a former Jesuit college, this museum, near the marina, hosts a collection of the island of Faial’s art heritage and old-time tradition. This is the museum to visit if you want to know about ancient Horta and everything about the island’s pottery, linen, and wool-making industries. In addition, there are many engaging displays here that are dedicated to the island’s telegraph stations, geology, mineralogy, and liturgical art from the island’s convents.

The assortment of scale models of caravel ships is the must-see in the museum.

Horta is one of the youngest towns in the Azores, and when you come into the town from the waterfront, the beautiful old-fashioned cobblestone streets are flanked by quaint little houses against the imposing façades of churches facing the ocean are a breathtaking view.

In between the buildings, you can see a glimpse of the volcanic peaks that loom majestically from behind the town.

When you are in Horta, you can see the majestic rise of the Monte da Guia volcanic cone rising from the water to a height of 145 meters. This peak served as a whaling station in the 19th century. Once you climb to its summit, you will be able to view the entire town along with Faial’s lush green peaks.

This Jesuit church is a masterpiece in architecture. Its radiant gilt-wood altar and the beautiful azulejos on the walls of the name are a must-see. When you are here, you should also see the Senhora da Boa Morte chapel known for its beautiful oil paintings.